Random five(ish)-year-old, upon seeing LB in a shoe store. His mother blushingly tried to shh him, but was greeted with the second half of the quote.  Yes, we are aware that our son is roughly 30% head at this point.  We’re cool with it.

Ben: I have no idea how to potty train. I wouldn’t even know where to start.
Jacq: Me neither.
Ben: I mean, I know how to house train a dog, so it’s probably pretty similar…
Jacq: What, are you going to rub his face in it?
Ben: (laughing) If it works…

Is it wrong that I love it when my child bumps his head, or scrapes his knee?  Not in a sadistic way but because, at least for a minute, he’ll put his head on my shoulder, wrap his arms around my neck, and need me.

Today, as we were hanging out at a friend’s birthday party, he fell once, and needed me.  Then, every time he’d get scared he was going to fall again, He’d reach out his little hand in my direction, and latch onto whatever finger was closest.  Once he had my finger, he might as well have been bulletproof.

Yeah, he’s got a terrible streak.  He’s impossible to discipline.  He will frequently “go boneless” in a parking lot to avoid being put in his car seat.

But there are times like Saturday that make it all worth it.

We went to “Monkey Joe’s” — which in the original Greek translates more closely to “How did they fit this many screaming kids in this room” — for LB’s birthday.  I had been told it’s a great place to relax in leather recliners while your kid plays.

If your kid is exactly 2 years and 9 hours old, and not quite big enough to climb up the inflatables by himself, the only relaxing you’ll be doing is during the free-fall from the top of the inflatable as you hurtle toward your adorable son grinning from ear to ear at the bottom of the slide. 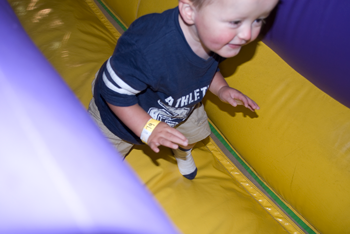 If they gave out awards for sweatiest parent, I would have come home with a trophy.  And my son definitely deserved a reward for least-afraid of the slides.  And these were really big slides. Here’s a shot to show perspective. 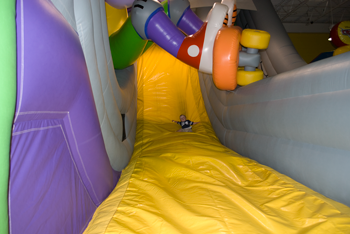 I had an absolute blast, and I have a sneaking suspicion that a certain two-year-old did as well.  Happy Birthday, sweet boy.  I can’t believe it’s been that long. 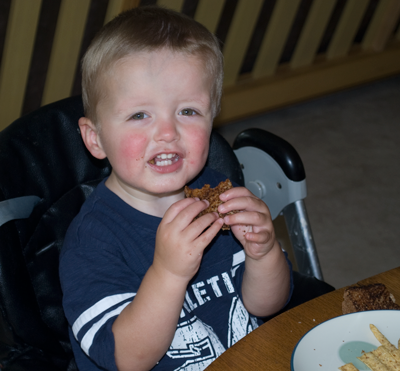 I suppose others can watch it, too.  (I uploaded a few more today to our YouTube Channel)