Does transparency matter?  Not according to the likes of Benny Hinn, Joyce Meyer, Kenneth Copeland, Creflo Dollar, and TD Jakes.

I spent some time recently on a the website of a ministry called MinstryWatch.com (the  online database component of Wall Watchers) to see, among other things, how Campus Crusade for Christ (the ministry my wife and I work for) is doing when it comes to honesty, openness, and transparency regarding financial issues.  I was thrilled, though not surprised, to see that we rank among the elite in terms of “putting our money where our mouth is.”  That’s one big reason why I work for this organization, and will for as long as the Lord continues to provide. 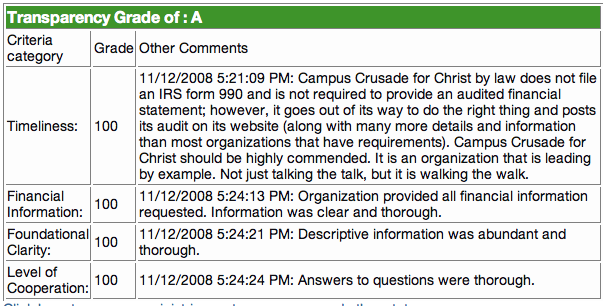 Where I was shocked was as I perused other ministries, and specifically those ministries associated with what’s been called the “prosperity gospel.”  Teachers who say that God intends for us to be materially wealthy are not being honest about their material wealth, when asked.

TD Jakes, for example, according the the site, was noncompliant when asked about his ministry’s use of funds.  That means that if you have ever given money to TD Jakes and his ministry, you have no idea how that money was spent.  Legally they may not be required to tell you how they are spending your money, but you can bet I’m not giving a dollar until I know how they will use that dollar.  And you shouldn’t either.

Plus, when Joyce Meyer, who clearly correlates financial prosperity and God’s blessing, is asked about how much she is compensated for her ministry efforts, why wouldn’t she jump at the chance to be totally honest and share how God is blessing her?  But according to the site, she’s released info about her ministry, but nowhere in it does she mention how much money her family makes off of the donations of others.  That is shady, at best.  It’s like she’s ashamed of the income she makes.  Again, that’s not an accusation, so much as a point of fact.  She has not been transparent.  Christians should be transparent.  Especially ones with massive budgets.

That brings me to Creflo Dollar.  His ministry is literally worldwide, with offices in South Africa, the UK, Nigeria, America, and Australia.  He and his wife Taffi co-pastor a megachurch that has spawned multiple corporations and ministries.  Then, when being asked to be transparent and tell folks who give how that money is being used, (and even being asked to do so by the federal government) they still refuse to give any information out regarding their financials.  While I don’t think it is the government’s place to investigate churches and their financial records, I do feel like the folks who give money to his ministry have every right to know how that money is being used.

Dr. Dollar, in the response to the government posted on his website, justifies their financial secrecy with the verse from Matthew 6:1-4 that references individuals giving in secrecy, NOT corporations stewarding in secrecy.  Again, I think the federal government is overstepping its bounds (and please don’t get me started on that as a topic in general), but I think Dr. Dollar’s justifications for corporate and organizational secrecy are absurdly unbiblical.  Nobody is asking him to disclose what particular individuals gave, just that he disclose a dollar amount of total giving, and how those funds were used.  To use the very verse he quotes, he’s on the “openly” side of the equation.  The members and others gave in secret.  It’s time for God to bless openly.  So openly that anyone who wants to see it can see it.  His own (half-biblical) theology says that God will openly bless his church financially if they are faithful.

God doesn’t do back-alley accounting.  He honors integrity and honesty.  If you have nothing to hide, hide nothing.

The list doesn’t end with those.  Go see for yourself which ministries refuse to give account of how they use funds.

What do you think?  Should churches and other ministries strive for openness and transparency?  Why or why not?  Comment below.

4 Replies to “If You have Nothing to Hide, Hide Nothing: a look at the financial transparency of Christian organizations.”