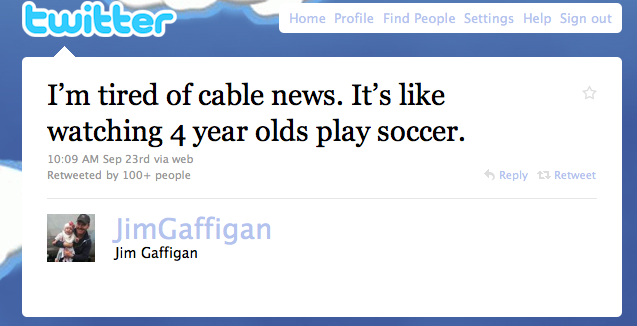 I couldn’t agree any more.  Like a group of kids chasing around a ball with almost no ability to do something useful with it, the news outlets have started circling again around a church scandal.

If you haven’t heard about Bishop Eddie Long and the scandal there, good for you.  Because it is literally all allegation and hearsay at this point.  4 year olds that can’t catch up to the ball.

This is not really directed at Bishop Long (though it is frustrating if the allegations are true and another vitriolic right-winger was just a closeted gay man trying to deal with feelings of guilt and shame apart from the gospel…thats a different post.) so much as it is directed at the news media.

I know, you’ve got to fill up 24 hours worth of news.  And more people watch scandals.  But seriously, at what point do you start telling people whatever will keep them in front of the tube, regardless of the moral ramifications?

Does anyone there say “What if these allegations are false?  How much damage are we doing to this man’s life by running with the story just so we can keep up, instead of holding off until we know the facts?”  How much is this man’s reputation, his future ability to be employed, his relationship with his wife, his kids, worth?  Another Chase Credit Card commercial contract?

We’ve lost sight, as a culture, of the fact that business is supposed to benefit society.  Fox News, CNN, and MSNBC have devolved into a shouting match.  And nobody is benefiting.

Worst of all, we the people have bought it–Hook, line, and sinker.  We willingly sit and hear the rumor-peddling and slander that passes for the news, and worst of all, we go and repeat it, so that others will come and listen to us.

Capitalism only works with moral restraint. There has to be a higher standard for which you can’t be bought.  I’d propose that standard be the golden rule.  Put yourself in the shoes of the people in the story.  Do you have enough of the facts to run with it?  Would you want someone to tell the story with the same amount of facts, if you were the one with a name in the headline?  In the end, refusing to sell out will actually help you to be a part of the solution, and will actually end up being quite financially beneficial for you.

I’m not calling for a boycott.  But I do think you should stop watching the news, folks.  What good is it doing for you? When is the last time something on the news actually enriched your life?